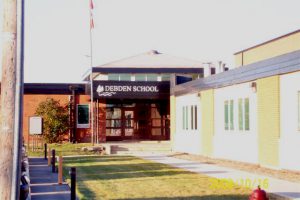 The first school, a one-room school, opened its doors on September 1, 1915.  By 1922 the need for more space had grown and a two-room school was built.  With the closing of many rural, one-room schools, and the move towards centralization, Debden School was expanded to a 9 classroom, two-story building which became known as the White School.  In the 1960's two wings were added.  These wings included two science labs - one for the junior high and one for the senior grades 10-12.

As Ministry of Education curriculum changed, so did the school.  The 70's saw the addition of a gymnasium, a Home Economics lab, an area to teach Industrial Arts and a library. At the time the school population had grown to nearly 500 students and again there was a need for more classroom space.  A three-room school from Forgan was moved to Debden and attached to the two-storey White School.  After this the school did not see any physical changes for many years.  The 1990's saw the beginning of a decline in rural school enrollments and the three-room Forgan School was closed and sold.

In the 2003-2004 school year, a major renovation was undertaken.  the school day was lengthened to enable the school year to end in the first days of June.  For that school year all classes were housed in the old White School and the basement of the R.C. church.  The high school part of the building, as it was known, was completely gutted and renovated.  The renovations were supposed to be done by the beginning of the 2004-2005 school year but it was only in early 2005 that the staff and students moved into the building that you see today.

With the renovations many changes occurred, but the most outstanding were the addition of a new computer lab, the new gym floor and the staff parking lot.  After the move, the old White School was demolished and basketball courts were built in its place.

Today, Debden School continues to be a dual-track school, offering both French immersion and the regular English curriculum.  The school enrollment has stabilized at around 185 students.